Garden Shows During Tết in HCMC

In Ho Chi Minh City for the Tết holiday, January 2020? Concerned it will be a ghost town to be haunted by Karaoke at full volume by neighbours making the most of empty houses around them? Well, it's not as empty and quiet as you'd think. I can't help you with the karaoke. That's to be borne unless you are in the more expat districts. So to have a break, you could check out the roadside flowers for sale, Nguyen Hue Street Spring Flower Market and Tao Đàn Park Garden Show. 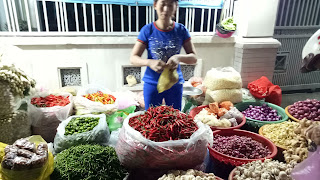 Many night markets pop up especially for the festive season.


Tết is in January this year, and it is bringing in the year of the Metal Rat. Already you can start to see the early street stalls setting up with orchids and lucky flowers. As it gets closer to Tết, the main streets of the city will start to get lined with flower sellers and can look really beautiful. Cộng Hòa Street is especially busy, as it is where many farmers enter the city. In the northern part of Vietnam my Hanoian friend told me they prefer the pink peach flowers during the Spring Festival. However, HCMC is tropical and many blossoming trees just don't survive here. Instead, the pretty yellow ochna itegerrima, or Mai tree (Mai Vang) is popular here as it can survive the heat. A bonus is that the yellow can represent gold and abundance. A little more information is here.

The different meanings of flowers between Hanoi and Saigon.

During Tết you can go to Nguyen Hue Street in District 1. When I went last year, at one end they had dancing and other performances by different Vietnamese ethnic groups, which was really interesting. While at the other end there were beautiful flower displays. I went during the evening. It was busy, but manageable. I get a bit antsy when things are too crowded. However, it had an energetic, friendly vibe and you could move about quite freely.

Finally, there's Tao Đàn Park Garden Show. Last year I found this by accident. It is near where I first stayed in HCMC, so it has frequently been a landmark for me. If I went anywhere I often went via the streets that passed it. So, when I saw it being set up just before Tết, I thought I'd go back and have a look at it - and it was totally worth it. I shared a few photos of the gate display last week and I have some more photos in this one. I can't wait to see what they create this year! Inside is a variety of competitions for large displays, bonsai trees, and bonsai gardens. There's lots of food, concerts and games. It's a family outing with many people dressed up in their new Tết clothes, but it's casual too. You have to pay to get in, about VND30,000 per person. 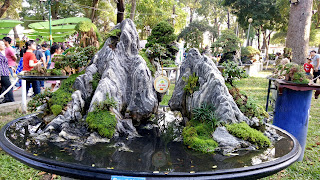 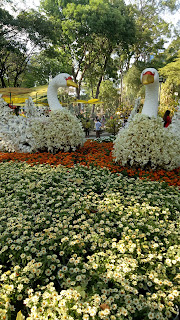 Overall, Tết is a great holiday for pot plant gardens. Many people have their newly acquired plants on the street right in front of their homes for all to see and share. It can be pretty finding little streets with their flowers lining the way.

I will put more photos up after Tết to show you what they did this year. If you are here in Vietnam for Tết, Chúc mừng năm mới! And all the best for the year of the Rat.

Update: I have been looking for dates of the various garden shows and displays. So far, I haven't found the dates for any of them. However, many websites mention past years Tết garden shows and markets starting on Lunar December 23rd or 25th, which this year (2020) are January 17th and 19th. Tết itself is on January 25-27th with family dinners starting on the Eve.

Looking for these dates has meant I have found out more about the flower markets and I have shared a link here. I used this website to find the dates. Vietnam starts out similarly to China, but doesn't officially prolong it. 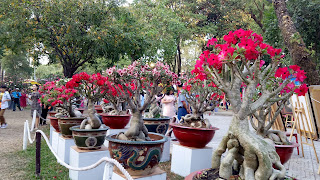 Loving gardeners without space or budget

I have been living in Vietnam for a year now. It's taken me a long time to write as I lost confidence and but I have been working on that and I can't help but see the love of gardening here in HCMC and want to talk about it.

If you come here as a tourist you are most likely to go downtown to Districts One, Two and Three. There, you can see tree-lined avenues and large public garden parks. They are quite lovely and offer a respite from the heat and noise of the shopping streets. There’s a lot to do and see there as you can easily find out from websites like Lonely Planet and Trip Advisor.

However, I lived in Bình Thạnh District in my first year, and although I have moved to a pretty tree-lined street in District Seven due to work, I miss it there. The streets are narrow and noisy, but there are little shops everywhere as the entrepreneurial Vietnamese are aiming high in their economic growth.

In fact many of my university-aged students frequently have jobs and companies as well as their full time studies. So, back to the streets of Bình Thạnh where, as you wander around, you look up and see the balconies with plants from fully decked-out gardens to just a pot of lemongrass for cooking. It is rare to see a balcony empty of anything. In a country where personal political opinions are not encouraged, the Vietnamese express their individuality through their homes and balconies. Sleek modern straight lines neighbour flamboyant baroque-like facades.

Join me as we explore the gardens in pots around HCMC.

Posted by Nicolajnz at Sunday, December 29, 2019 No comments:

Mango in the Compost


Sometimes magic happens. I've been making a new bucket of compost and a couple of weeks ago right in the centre, I couldn't have placed it better myself, a small seedling with long soft purple-bronze leaves grew.

I couldn't for the life of me think what it could be. I racked my brains trying to remember what I'd put into the compost; there'd been cut flowers, fruit and vegetable peelings and so on and so on. I scoured my books and images in Google. The problem is that there aren't so many photos of seedlings. Finally, a picture that looked just like my little plant came up - it was a mango, and I had been eating a mango a few weeks back.

I'm glad I persevered as it's beginnings are quite different to what it looks like now. Now, it looks like many green seedlings, but in the beginning its three long leaves dark-coloured leaves were very soft and could have you believing that it didn't have enough water. I knew that there was plenty of water, so I thought I'd wait and see.

Sure enough, the seedling's leaves are now sturdy and sticking up as normal leaves do. They've also changed colour to a rich green. Very nice. However, I have to find my little plant a new home in due course as it will grow far too big for my balcony and apparently it likes a deep place to send it's main roots down.

But for now, it's looking very beautiful in my compost. 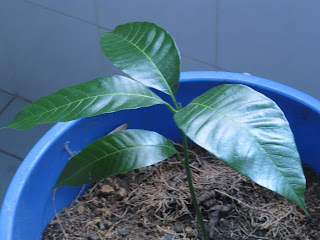 Lisianthus in the Tropics 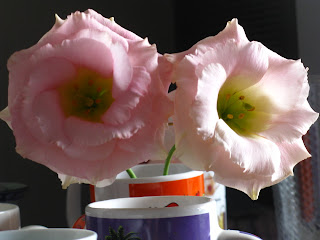 One of my readers finally gave me the name of the 'Paper Rose' that I bought a few years back,  Lisianthus (Eustoma grandiflorum), thank you Tramadol, and I can now research it and find out more about it.

The first thing I found is that it's from the warm regions in the Americas and so is definitely suited to our tropical climate here in Malaysia and South-east Asia. Secondly it is an biennial, so it will die off, but it can give you a couple of years, or seasons, of flowers.

Apparently it's drought resistant, but likes regular watering with good drainage. It likes the sun a lot, but a very wind-sheltered sunny spot might be too hot. To promote flowering you can cut the long stems which are great show flowers and can last 2-3 weeks in a vase.

So, if you are out in Sungai Buloh and you find these flowers, you can rest assured that you can grow them in a sunny spot in your home. I'll put some links below to sites I looked up if you want to know more. However, I mention the main care needs above, and will mention one more word of caution - that they don't like their roots disturbed too much. So either keep them in the pot they came in, or put them into a bigger pot without trying to separate or loosen them.

Have fun with them. They are such beautiful flowers.

Just click on 'print' to open and make it bigger

Garden in a Pot

Promote your Page too

My green thumb came only as a result of the mistakes I made while learning to see things from the plant's point of view. ~H. Fred Dale