I'm very excited because I've finally found out the name of a plant that I've had for about five years, pictured below. 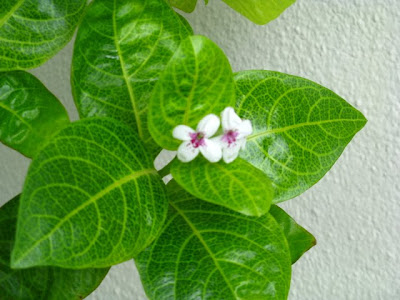 It's simply known as Pseuderanthemum reticulatum or by its simpler common names of Yellow-Vein Eranthemum and Golden Pseuderanthemum! Phew, I don't think those names will be flowing from my lips in a hurry. But it's great because now I can research it properly and improve my care of it.

Before I carry on though, all credit for finding the name goes to a lovely lady called Jacq who's listed in my blog list. She found it in a book that she just got called Tropical Horticulture & Gardening. We'd both tried googling it, but couldn't find the picture anywhere. Now I can find it everywhere! So thank you Jacq.

So far, what I've learned is:

1. It likes sunny to partial shade. Does best in bright indirect sunlight coming from the South/East/West. I have sun from the west, so great.

2. Likes a bit of humidity

3. Even watering and fertilizing every fortnight.

Nothing new really as my 'Golden Pseuderanthemum' (maybe I should nickname her Goldie) really lets me know when she wasn't happy. She curls up her leaves and drops them in the space of days if she was throwing a tantrum. But I like one idea about making it more humid and that is adding pebbles in her water tray and keep it filled with water to increase humidity. I'll have to put mosquito pesticide in it too though. I might try it with my orchids as well, as they aren't too happy right now. They aren't dying, but they aren't growing either.

I'm thrilled to find out her name. Goldie's a lovely plant and her flowers are very pretty. I got her when I went to Bukit Tinggi Botanical Garden and Japanese tea garden. Lovely place. I had another one, but it sadly died in January when all my plants had to stay inside. Most of them weren't happy, but the goldies acted like pre-schoolers kicking and screaming on the floor. All the leaves dropped pretty rapidly and then the stems started going brown. Thankfully, one didn't give up entirely and I managed to get her out in time. Pruned her back to the green and away she went.
Posted by Nicola at Tuesday, March 22, 2011

Just click on 'print' to open and make it bigger

Garden in a Pot

Promote your Page too

My green thumb came only as a result of the mistakes I made while learning to see things from the plant's point of view. ~H. Fred Dale